The history of our company begins a long time ago and is far from wine.

Víctor Pino Torche, the first gentleman in our history, was not born in a traditional Chilean wine family. The family worked in the mining administration and the farm was a retreat during the summers in San Juan de Pirque. San Juan was not a “wine country”, but simply a small village on the banks of the Maipo River, high up, where the Maipo Valley narrows and rises to the Cajón del Maipo, flanked on both sides by large rocky walls of the Andes.

The second knight in our history: William Fevre, is best known for his Premier Cru Chablis that he produces in Burgundy. Mr. Fevre was looking for terroir to produce Chardonnay. It seemed strange to him that the Chilean winemakers produced fruits in the plains and looked for a piece of land high up in the mountains. And that’s how he came to knock on Victor’s door in San Juan after exploring the property from the hills on horseback.

After much conversation it became clear that Victor would not separate from what the family appreciated so much, and then a society was formed that would develop the vineyards and a small winery based on William’s keen sense and Victor’s determination. Twelve hectares where they were planted, and then more in another farm of the Pino family. Five years later a winery was built. It was a practical matter that included modern equipment, but was clearly oriented to a Burgundian-style operation that slowly made wines, on a smaller scale, barrel by barrel.

The wines quickly found their way to Europe. Initially, several bottlings of Chardonnay, rather of the old world style, touched the sensitive fiber of the markets, but later the Cabernet cultivated in the mountain would be recognized. The vines took time to mature, because they were planted at higher altitudes, where the snow fell and the growing season was cooler. None of the founders were in a hurry. Patience was allowed. The roots of the vineyards grew deep in the subsoils of the banks of the Maipo River. When the photographs of the winter pruning showed snow on the ground, many in the Chilean industry had fun and thought that Victor was crazy for having undertaken such an adventure. Decades passed, the vineyards matured and the project took a turn.

By the year 2000, a dozen countries had adopted the wines and there was an opportunity to expand the company. Víctor’s youngest son, Gonzalo, was interested, both in the interest that, with six children in school, he left a comfortable career in retail and went to work on the farm.

Under Gonzalo’s leadership, the firm continued to make a difference with respect to the rest. Gonzalo counted on the help of Dr. Pedro Parra to help better understand why the San Juan wines were different and how the farm could be further distinguished. Work continued and the small business continued to grow. When winemaker Cristián Aliaga joined, the firm found its focus on fewer wines. The plots were now well separated and the floors well understood. It became evident that the second property, planted next to the winery, had been the bed of an ancient tributary of the Clarillo River. These lots were separated to reflect the winding path of the riverbed. Some of the lots were grafted and years later an earthy Cabernet and a Cabernet Franc found their way to the best of the mixtures.

Today, the work continues with patience and resolution under the proud gaze of Victor and William, who twenty years later, have just begun to talk about the project:

Our winemaker Cristián studied Oenology at Universidad de Chile. He made his first harvests at Errázuriz in Aconcagua Valley. Then he worked for 12 years at Veramonte, in Casablanca Valley, becoming Chief Winemaker.  During that period he made harvests in other wineries such as Kendall-Jackson, Paul Hobbs, Saintsbury and Quintessa in California, Villa María in New Zealand and Chateau Dillon in Bordeaux, France. Then he returned to Chile to work in William Fèvre, looking for new challenges in the new Chilean terroirs.

Our mountain vineyards are located in the Maipo high above the valley floor in the foothills of the Andes. In these less hospitable, rarified conditions the vines must work harder to mature their fruit and thus produce fresher berries, with deeper concentration and round yet broad-shouldered tannins. We have spent more than two decades understanding the nature of the soils and the weather of the micro-climates on five different farms and the result are wines with a distinct mountain-grown personality. These wines are: Espino, Espino Gran Cuvèe, Chacai and the latest addition to our Mountain grown family: The Franq Rouge.

The Maipo Valley is famous for producing some of the best Cabernet Sauvignon in the world. We have it. And also Chardonnay and Pinot Noir due to the freshness of our mountainous terroir, and Cabernet Franc and Carmenère in the mountainous piemont for its elegance. We also planted Syrah, Carignan and Tempranillo to mix and add complexity. Finally, our location just across the Uco Valley motivated us to plant Malbec in the easternmost of Chile.

WFC has spent two decades understanding the nature of the soils of the (Muy) Alto Maipo. Work continues, more detailed in its application, and the years of soil studies with Dirt-Doctor Pedro Parra have helped fine tune the many parcels around the farmsTHE WINE

Over time, little by little we have learned the arrangement of the land and the path of the fruit: closer to the river the fruit ripens more slowly, then the vines need to be pruned to expose the fruit to the greatest amount of sunlight. Our goal is to express the purity of this mountainy character: simple, elegant and fresh. Therefore, the concept of our brand ESPINO reflects the austerity of the land where we keep in a bottle all this natural fruit.

Chacai is made from our San Juan de Pirque farm at almost 1,000 meters above sea level. The vineyard is in a creek called Chacai, that means in our native language “espino negro” (black thorn tree), this land is privileged to combine the round stoned soils of the alluvial river bed of the Maipo River with a partial intrusion of cracked colluvial stones from the Andean gullies above. 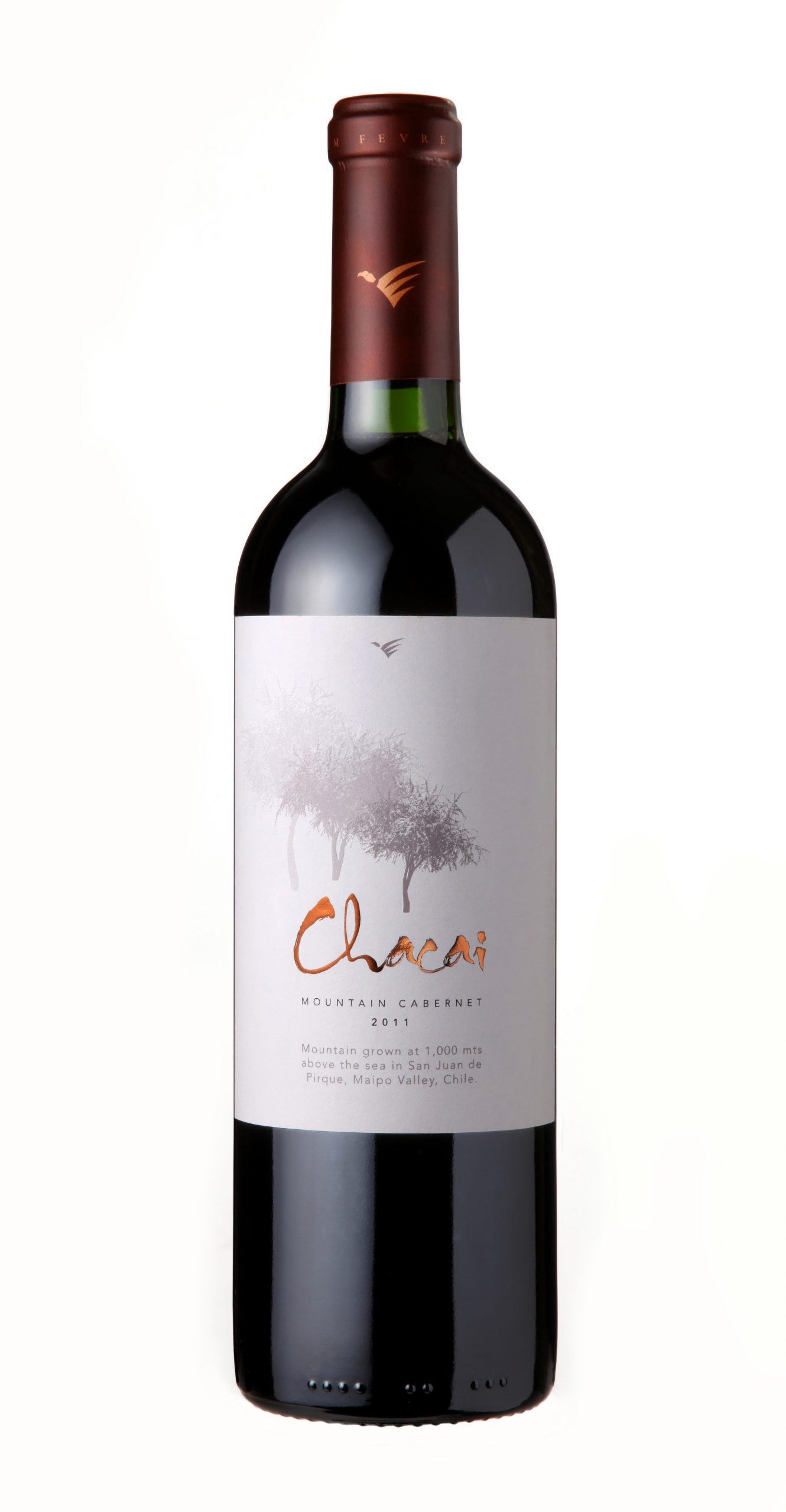 The Franc Rouge 2017 is an expressive wine from the beginning, powerful, deep, attractive. Black fruits appears First, then toast and violet fruit.

The place is called Quino, a little village in the South of Chile that means “between two rivers”. Quino is far, far from the traditional border where wines are produced in Chile. It’s valleys are guarded by five ancestral guardians: the volcanos Tolhuaca, Lonquimay, Llaima, Sollipulli y Villarica.

A small plantation of vines 8 years ago was the beginning. In this land of volcanic origin -that belonged to the family for years- rose the challenge of working with a viticulture of little intervention in a place with more than 900mm of rain per year and heavy frosts, that allows to grow a great Chardonnay and a splendid Pinot Noir. More Burgundian than Chilean…wines too.

The land of the South talked about its aptitude for the vines: the quality of the fruits of Pinot Noir and Chardonnay defied a enology that rescued the identity of the wines more for their origin than by their strain. Here the skies are limitless, the horizon measures itself out as far as the eye can see. Amidst the Andean peaks three ancient volcanoes, stand and watch over the SoutherMost vineyards in Chile.

Quino is different than Chile’s Central Valley. Here a long vegetative period gives us great citric notes, also minerality and earthy notes from the volcanic soils. If you look for tropical notes…don’t drink us.

This wine is produced with grapes from dry land of Malleco Valley, in the extreme southernmost of Chilean wine land, where a few wineries started to produce fruit just a generation ago. A wine with character and identity, showing freshness and passion on the glass, reflecting a place, and origin, a terroir. A new age and a new concept of what means Southermost in Chile.